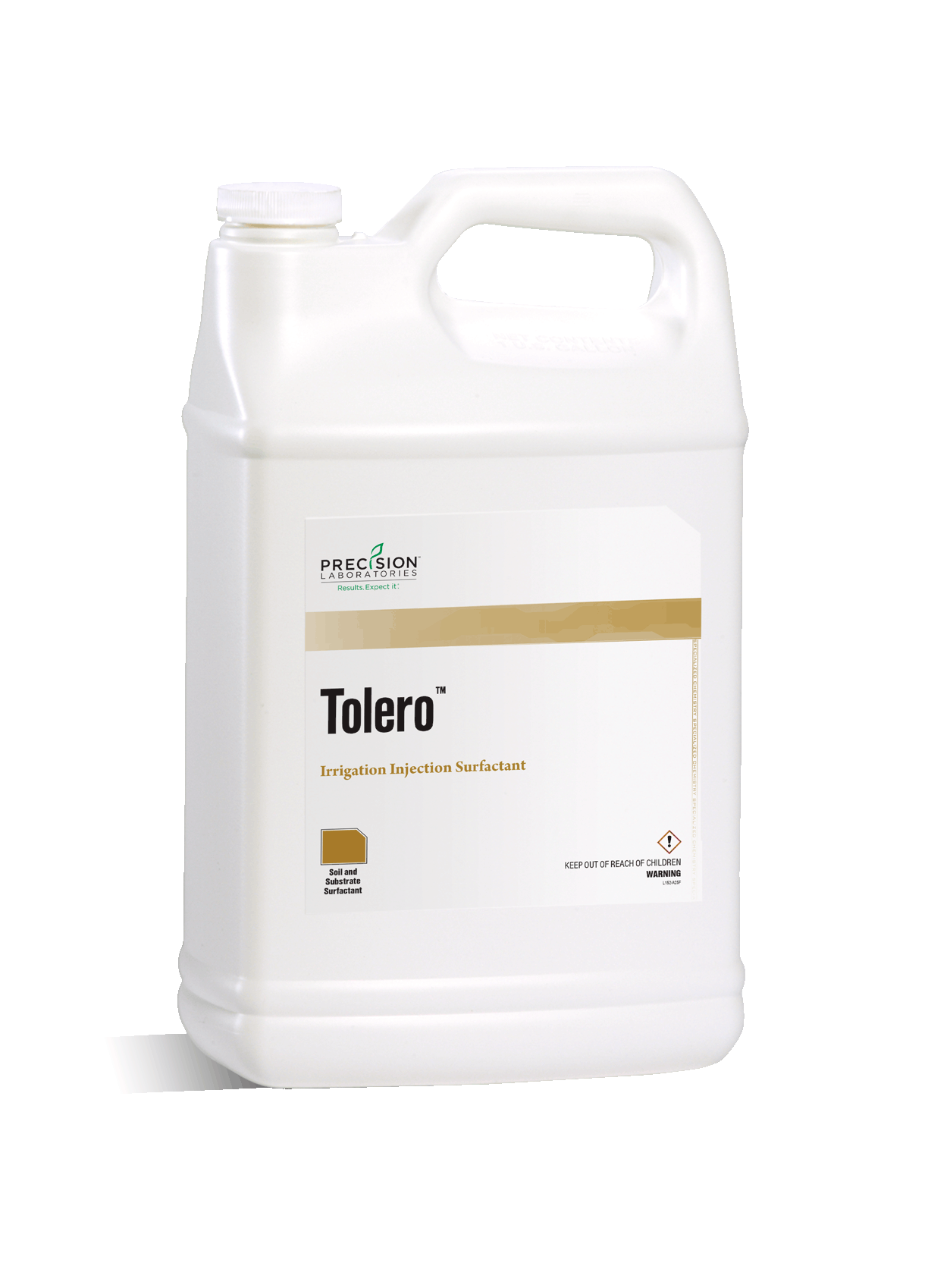 WAUKEGAN, Ill. (June 19, 2015) – Water insecurity, regulations and increased demand, in combination with an increasing population, makes it more critical than ever for growers to feed the world with less water and energy. To address these concerns, Precision Laboratories introduces TOLEROTM, an irrigation injection surfactant proven to increase crop yields while reducing irrigation water and the energy needed to move it.

“Agricultural irrigation is the top consumer of water in the United States. With mounting competition for fresh water, growers are under immense pressure to increase crop yields while reducing water and energy,” said Don Spier, vice president at Precision Laboratories. “We understand these demands on growers and are proud to help them be successful in a whole new way that can revolutionize agricultural irrigation practices.”

Irrigation in the U.S. covers nearly 52 million acres of harvested cropland and uses more than 79 billion gallons of water per day, according to the 2013 data from the USDA Farm and Ranch Irrigation Survey. This vast amount of water has great opportunities for more effective management with less waste. Many growers experience issues with water reaching the crop due to run-off and lack of distribution in the soil. Tolero improves the infiltration of irrigation and rainfall by spreading it into and throughout the plant’s root zone, keeping it readily available as needed. The increased water content in the soil enhances the growing environment by reducing plant stress and improving water and nutrient distribution.

“Lack of available water at critical stages of plant development negatively affects the establishment, fruit set, plant health and yield of most high-value crops,” said Spier. “Agronomists in western United States report thousands of acres of land are being removed from production due to insufficient water to grow crops. Incorporating Tolero into an overall water management program is proven to save water in one of two ways, either reducing irrigation time or increasing intervals between watering.”

Tolero’s efficacy was proven in third-party trials conducted on yellow squash, tomatoes, strawberries and romaine lettuce. Results indicate a significant crop yield increase while decreasing water use by up to 40 percent. Additionally, some trials resulted in reduced soil compaction, which enhances the growing environment for roots and overall plant health.

Yellow squash trials in Brooks County, Ga., indicate a 48 percent increase in fruit weight per acre, despite reducing water by 40 percent. There were two applications of Tolero applied through drip irrigation in this trial, one at transplanting and another 29 days later. In addition, data collected using a soil penetrometer confirmed soil compaction in the root zone was reduced by 33 percent. 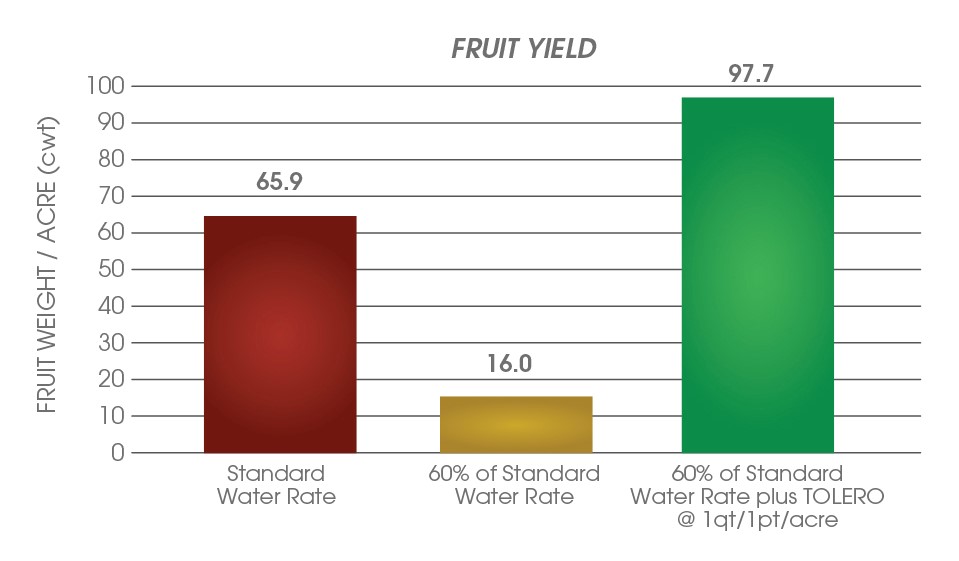 Moisture stress can damage a plant’s roots, flowers and fruit. In tomatoes, the most critical stages for consistent soil moisture are at transplanting, flowering and fruit development. Studies indicate that irrigated tomatoes treated with Tolero experienced an increase in fruit yield of 78.4 cwt. per acre, displayed improved plant health and reduced root zone compaction. The grower reduced water use by 40 percent, which also conserved energy needed to run the irrigation system.

Performance data with yellow squash shows a 48 percent
increase in fruit weight per acre despite reducing water volume on tested plots by 40 percent, as indicated in the graph on the right. 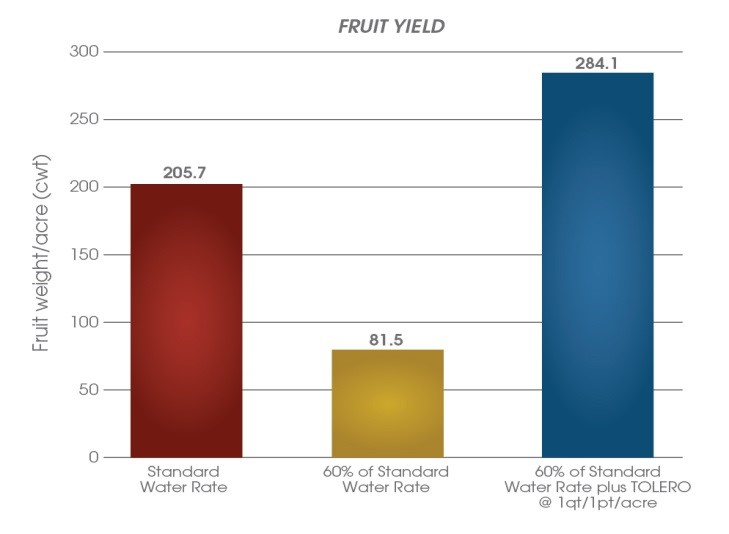 Performance data in tomatoes treated with Tolero through the irrigation system experienced an increase in fruit yield of 78.4 cwt. per acre with a 40 percent reduction in water use, as indicated in the graph on the left.

Future data trials will include such crops as citrus, celery, grapes and nut trees.

“Providing specialized chemistries that enhance plants, seeds, soil and water is what we do,” said Spier. “We are excited to launch a product that not only helps growers be responsible stewards of the environment by using less water and energy, but also helps increase their return-on-investment.”

For more information on Tolero and other Precision Laboratories products, visit www.precisionlab.com/ag-water-management .

Precision Laboratories is a leading provider of specialized chemistries applied to plants, seeds, soil and water to maximize resources and biological performance potential while stewarding the environment. For more information on the company's products and its value-added dealers, call 800-323-6280 or visit www.precisionlab.com.

Let us know if you have any questions, comments or suggestions. Contact us now.

Precision Laboratories is a leading provider of specialized chemistries applied to plants, seeds, soil and water to maximize resource and biological performance potential while stewarding the environment.